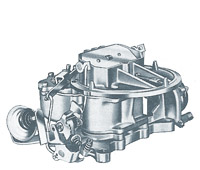 The ABD was a two barrel, all aluminum carburetor used on Ford products starting in 1959. In US production, it was most commonly found on Y-block engines, including the Lincoln.

Fords produced for export markets, including Mexico, used the ABD throughout the 1960's, and the carburetor was also available as an over-the-counter replacement for the Ford 2100