For a while in the 1950's it was a favorite of hot rodders. It is the carburetor in our header image, which is from a poster for the movie Dragstrip Girl. 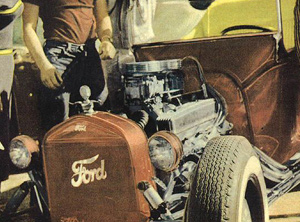 This appears to be two Stromberg 4A carburetors on a nailhead Buick with Offy valve covers. Sweet.