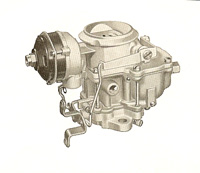 The Carter BBS is a 1-barrel carburetor that superseded the old BB starting in 1954. Compared to the taller BB, the BBS allowed for lower hoodlines and could be used on V-8's as well as inline engines.

Carter BBS carburetors were produced from 1954 to 1979. Later versions were used on Slant-6 engines and featured a remote (manifold-mounted) choke.