The Carter Thermoquad (TQ) is a large four barrel carburetor with small primaries and large secondary bores, referred to as a 'spreadbore' design. Thermoquads share the same flange as Rochester Quadrajets and Holley spreadbore carbs but use different flange gaskets.

The main body or float bowl of the TQ is made of black phenolic plastic which is meant to keep the gasoline cooler than a conventional metal float bowl. 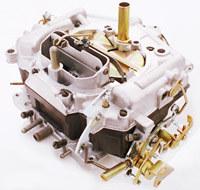 Thermoquads were used as original equipment on mostly Chyrsler products from 1971 to 1985.

The carb was also produced in aftermarket versions up to 1000 cfm.

The TQ is a sophisticated carburetor that uses some of the same design concepts as the Rochester Quadrajet, including a secondary air valve/variable area secondary venturi that allows the same basic carb size to be used on a range of engine sizes.

A detailed discussion of the characteristics of the Thermoquad carburetor is here. This excellent guide was written by Gary Lewallen and is reproduced here with his permission.